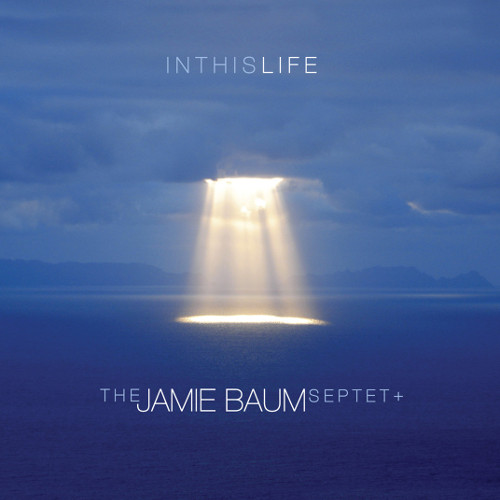 “★★★★ In This Life roars out of the opening gate with the blistering “Nusrat,” a nod to Qawwali vocalist Nusrat Fateh Ali Khan, whose presence reverberates throughout the album… Baum effortlessly blends seven or eight voices into an orchestra that feels unstoppable at times.”
— Sean J. O’Connell, DownBeat

“In This Life” – The virtuoso flutist confirmed her status as a masterful composer with these 11 pieces for her Septet +, synthesizing her love of the rhythms and melodies of South Asia with orchestral jazz harmony.”
— Jon Garelick, Boston Globe (picked #2 of top 10 Best Jazz CDs of 2013)

“A New York flutist, Ms. Baum (is) into tone color and timbre and the blending of languages, jazz, and 20th-century classical and Afro-Latin music. But she’s got an elegantly persuasive composing hand… her composing ideas have gotten particularly strong on In This Life (Sunnyside).There are no pedantic mixtures here; she makes what she takes from classical minimalism and Indian qawwali mix together and feel natural.”
— Ben Ratliff, New York TImes

“Flutist-composer Jamie Baum… has revamped and slightly expanded her septet for this project, which she unabashedly claims on her website to be her “best to date.” She may be right: The highlights are certainly enthralling.”
— Britt Robson, JazzTimes

NPR Interview by Arun Rath for All Things Considered: The Inspiration Of Jazz Flautist Jamie Baum

“In This Life , a breathtaking new release, from Jamie Baum… and a stellar line up… One of those recordings that just launches itself into space and picks up speed as it goes. Outstanding. Highly Recommended.”
— Dave Sumner, EMusic

“On In This Life… it’s hard to grasp all of this musical activity in one listen. Wherever you turn your ear, though, something remarkable is happening.”
— Suzanne Lorge, New York City Jazz Record

Long an experimenter in new chamber jazz textures and milieus, NYC flutist-composer-bandleader, Jamie Baum, accomplishes her biggest breakthrough with the stellar In This Life.

An album inspired by her travels in South Asia and the music of the late Pakistani Qawwali vocalist Nusrat Fateh Ali Kahn, Baum’s musical imagination and skills are not limited by her origins or circumstances – instead, they are enriched by her experiences. They help her realize In This Life, a suite of pieces for her newly minted Septet+ (an evolution of the longstanding and renowned Jamie Baum Septet). The recording is exciting, beguiling, memorable, warm, virtuosic and multi-layered. It is one of those treasured recordings that pulls you in, revealing more and more depth with each subsequent hearing.

In Baum’s 14 years of composing for this “little big-band,” her collaborations across a wide range of styles including jazz, classical, “new music,” Indian and Latin music are known among aficionados. However, In This Life solidifies her shrewdness for being able to put together a band that is able to showcase her compositional vision and bring out a unique mix of solo voices in the process. Her band of players of varied backgrounds and ages, serve as a cross section of the new New York scene.

Amir ElSaffar (an acclaimed yet still-emerging Iraqi-American microtonal trumpeter) and Taylor Haskins (a veteran big band and studio section player and accomplished electronic musician and producer) flesh out the brass section, veteran Downtown guitarist Brad Shepik (known for his work with Tiny Bell Trio and Pachora in addition to his own groups) and pianist John Escreet (a semi-recent addition to the New York scene from London, who is noticeably striving to achieve an original voice at the keyboard) are newly in the mix. Returning Septet members include Douglas Yates (alto sax and virtuoso bass clarinetist), veteran drummer Jeff Hirshfield and Chris Komer (French horn) and a rhythm section filled out by up-and-coming bassist Zack Lober, Dan Weiss (here playing tabla) and the increasingly in-demand Latin percussionist Samuel Torres (here on congas).

The band’s several touring opportunities over the past few years, performing this music in front of live audiences before landing in the studio to record, results in exciting interplay, and creates a depth and vibe both vivid and palpable. Taking to heart the meaning associated with each composition, they transport us on their journey as experienced on “In Another Life” and the touching “While We Are Here,” written in honor of Baum’s cousin who had passed away suddenly.

From the opening flute cadenza of “Nusrat,” which dives into a swirling ensemble riff, to the final haunting “Sweet Pain,” the compositions are arranged as a detailed yet inseparable blend. She paints for us a rich palette of melodies, harmonies, timbres and rhythms in compelling, surprising and exotic ways, which listeners will turn into stories themselves. Her flute passages are special highlights but the most impressive aspect of In This Life is how as a composer, she braids all the individuals’ strains and solos into the grander sweeping whole.

Baum’s prior septet recordings (with trumpeter Ralph Alessi and pianist George Colligan) include Solace (Sunnyside) and Moving Forward, Standing Still (Omnitone), both of which displayed her grasp of the triumphs of Stravinsky, Bartok and Ives, and her uncanny ability to write complex music with accessible melodies. Her earlier CDs, Sight Unheard (GM Recordings) and Undercurrents (Konnex), featured a quintet setting including the acclaimed trumpeter Dave Douglas.

Her international tours, awards and grants for composition, high honors for mastery of flute and alto flute and her ground-breaking work as a clinician deserve greater attention. The National Endowment for the Arts, International Jazz Composers Alliance, Meet the Composer, Chamber Music America and the American Music Center have all supported Baum’s efforts as a composer. Her compositional efforts as well as her flute prowess, has been lauded in the media by Down Beat Magazine, JazzTimes, Jazziz, The New York Times, AllAboutJazz.com and the Jazz Journalists Association, among others. Her extraordinary playing credits include tours as a US State Department/Kennedy Center Jazz Ambassador, in 1999 to South America and in 2002 to India, Sri Lanka, Maldives, Thailand and Bangladesh.

Speaking of her tours specifically in South Asia in her liner notes, “I was touched viscerally by the sound of the tabla, Bansuri flute and vocal music, as well as by my many opportunities to perform with top Indian icons,” she writes. It was on this tour that she performed with V.M. Bhatt and Sandeep Das and mridangam guru Karaikudi Mani, teacher to Jamey Haddad (percussionist with Paul Simon), among others.

“It was an extraordinary experience working and performing with Mani and his 8 piece ensemble. He’d composed a piece for our performance, and having the chance to spend two days rehearsing and discussing the music was transformative.” She would later return to perform in India and Nepal in 2003 and 2009 respectively, absorbing the distinctive character of these lands as well as immersing herself in the music of their artists.

In This Life is original breath-taking music with its own winning personality, not an homage. “With great respect for their traditions and vast language, and without immersing myself in deep study, my goal was not to play or compose in these styles, but to have my travels and playing experiences inspire new ways of writing and improvising,“ she says. “I know this project is my best to date reflecting the coming together of many diverse influences and experiences from the last 10 years.”