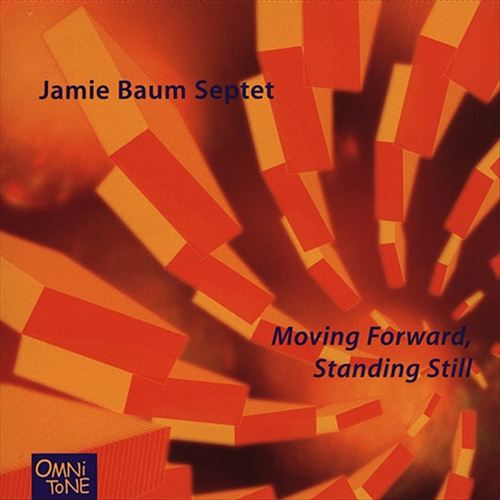 “As good as these compositions are, it’s the combination of composition and improvising that makes this album so fulfilling. Baum herself is a terrific jazz musician, with impressive control, dynamics, ideas, and swing. With Moving Forward, Standing Still, Jamie Baum has made a serious and possibly significant contribution to jazz.”
— Marc Meyers, All About Jazz

“Moving Forward, Standing Still is a gem… this is a jazz recording that exemplifies first-rate jazz improvisations and mature, stylistic interpretation. I find the writing and performance to be of the same high integrity as that of Jim McNeely, Kenny Werner and Maria Schneider. Baum’s improvisations floored me. Her solo work on flute is of the highest caliber in the idiom. I am now a big fan.”
— Bob Lark, Flute Talk Magazine

“A huge step forward from her already impressive 1997 recording, Baum’s third album as a leader is simply outstanding. That sense of musical freedom, an unwillingness to limit herself to simply to staid through-composed pieces, post-bop jazz classicism, or free improv experimentalism, but to mix and match the elements that suit her needs on a piece-by-piece basis, is what sets Baum apart from many of her peers, and what makes Moving Forward, Standing Still an immensely satisfying, exciting listen.”
— Stewart Mason, All Music Guide

”A respected jazz musician, one with a couple of well-received CDs under her belt… on Moving Forward, Standing Still she’s assembled a crack team of others like her — leaders of their own bands, much-in-demand sidemen, and skilled improvisers… all the music is very much her own. It’s accessible without being insipid, pretty yet intellectually engaging, and strikes a fine, deliberate balance in giving soloists ample freedom without permitting them to abuse it.”
— Bill Beuttler, Boston Globe

All compositions by Jamie Baum, Lynnjam Music (BMI), except where noted.

The you in “All Roads Lead to You” is Igor Stravinsky, one of several contemporary classical composers who’ve influenced the music on Moving Forward.   There are multiple overlapping and dovetailing lines, meters, timbres, tempos, and energies inspired by the piece she rediscovered while working on her graduate degree at the Manhattan School of Music.

The piece contains also, by the way, one motif Jamie reworked from the Rite of Spring, and a phrase later in the piece apparently quoted from John Coltrane’s “Naima” was purely coincidental, a factor of how great music creeps into the collective musical conscious (and unconscious).

Phrases from one of Bela Bartók’s string quartets are quoted in (yes, you guessed it) “Bar Talk,” and Stavinsky’s Rite remerges in “Spring,” the first piece Jamie wrote for the Septet, a configuration she settled on artistically for its flexibility of size, the openness of its uncommon instrumentation, and the challenge of making a small group sound big.  From a practical standpoint, she chose septet because it is large enough to give her a variety of voices to work with without being as big of a “money pit” as a larger ensemble.  Adds Jamie, “I couldn’t imagine what a big band would cost.”

Also, as a flutist, she’s spent quite a bit of time over the years in smaller chamber-type ensembles playing classical music, new music, Brazilian music, and Latin music.  Originally from Connecticut, now living in New York City, Jamie works performing, composing, recording, and holding clinics.  She has toured extensively in the US, Europe, Japan, South America and South Asia, performing at festivals, clubs, and concert halls with her own ensembles and well as with luminaries ranging from Kenny Werner, Tom Harrell, Fred Hersch, and Randy Brecker to Dave Douglas, Paul Motian, and George Russell.

A winner of several Down Beat Critics’ and Readers’ Polls and a recipient of several grants and awards, Jamie has participated in US State Department/Kennedy Center Jazz Ambassador Program, touring extensively in South America, India, and South Asia.  She’s active both as a private teacher at home and at the New School and as a clinician nationally and internationally.

Jamie received a Bachelor of Music degree from The New England Conservatory and a Master’s Degree from the Manhattan School of Music in jazz composition.   She studied flute with Ransom Wilson, Robert Stallman, Hubert Laws and Keith Underwood; jazz improvisation with Richie Bierach, Dave Liebman, Jaki Byard, and Charlie Banacos and composition with Richard DeRosa, WT McKinnley, and Ludmilla Ulehla.

With such a wide and thorough training as an instrumentalist, improviser, and composer, it’s not surprising that influences of the various musics she’s played and of various 20th century classical composers became a sort of theme for Moving Forward.

Many pieces are conceptually as well as literally inspired.  For example, an actual walk through the park inspired Jamie to base “Central Park” on the concept behind Charles Ives’ orchestral piece “Central Park in the Dark,” an atmospheric depiction of the varied and overlapping sounds one hears while taking a stroll through the New York landmark.